Spring is the Time for Dormant Pruning 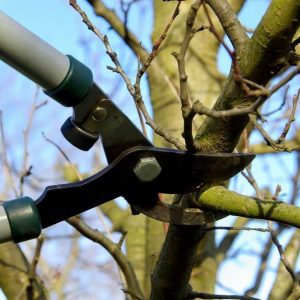 I usually write an article in mid-April about dormant pruning. This year with spring upon us so early, if your lawn is dry enough to walk on, you could certainly start dormant pruning. Many trees benefit from pruning at this time of year to open the canopy and correct poor branch structure.

When pruning deciduous trees, look carefully at the structure before you begin. First remove any dead and broken branches, those touching buildings and lower branches that are a hazard when walking next to the tree. Next look for branches that tangle or cross. One branch rubbing on another will result in bark damage that allows insects and disease spore to enter the tree. Decide which of the two branches is in the better position for good growth and remove the other. Also remove suckers that grow from the base of a tree and waterspouts that grow straight up from a side branch. They will eventually cause a tangled mess. Avoid pruning the leader of a tree. You will end up with a cluster of weak branches competing for dominance at the top of your tree.

Caution: avoid getting close to any overhead lines. If you see a problem branch in a tree near wires, call the appropriate company to deal with the situation!

Never prune maples in the spring! Sap is running and they will bleed excessively when cut. Maples should be pruned after the leaves have fully formed.

Removing some of last year’s growth before new growth begins encourages health, bushy shrubs. The general rule of thumb is to remove 1/3 to 1/2 of the previous season’s growth. For example: if your Spirea shrub grew 12″ in height and width last year, use pruning shears to remove four to six inches from the top and sides of the shrub. Try to follow the natural shape of the shrub tapering slightly out towards the base. By angling your shears down and out, the base will be slightly wider than the sides. Sun will hit all the foliage, resulting in a nice full bush. If you angle your shears inwards when pruning, the base will be narrower than the top and sunlight will not reach bottom branches. Leaves may die out and resulting in a shrub with a bare bottom!

Most summer and fall blooming shrubs benefit from dormant pruning. Those to avoid are early spring bloomers such as azalea, rhododendron, serviceberry, and forsythia. They should be pruned a little later in the spring once flowering is finished.

Shrubs that are grown mainly for interesting foliage rather than flowers can be pruned in the spring when dormant, e.g., Dwarf Burningbush, Dappled Willow, dogwood, Golden and Diablo Ninebarks.

Deciduous hedges are shaped in the spring as well: Peashrub, Alpine Currant, honeysuckle, and privet. Be sure to prune hedges a bit wider towards the base as mentioned above. This pruning method ensures a nice full hedge right to ground level.

Some evergreens can be pruned lightly now to correct shape. Cedar, yew, juniper, boxwood, euonymus, and hemlock fall into this category. Their main pruning time is early June, once spring growth is complete.

It is also good weather to apply dormant oil and lime sulphur to help prevent insect and disease problems. This combo will smother insect eggs, scale, mites, and disease spores. Apply to fruit trees, roses, ornamental trees, and shrubs on a day when temperatures are just above freezing.

As its name implies, dormant oil is only used before active growth begins. This horticultural oil will damage any green tissue. When oil is added to the lime sulphur, it does help the sulphur to evenly coat stems and branches.

I began my journey in horticulture in 1982 after graduating from the Humber College Landscape Technician program. At that time, I lead a talented crew of landscapers, taught evening courses in horticulture and had my own landscape design and consulting business. Then I ventured into the garden centre world. I’m lucky enough to be leading the friendly and knowledgeable team at New North Greenhouses.

Our Garden Centre on Airport Road

is CLOSED for the season.

Our Garden Centre on Airport Road

is CLOSED for the season.